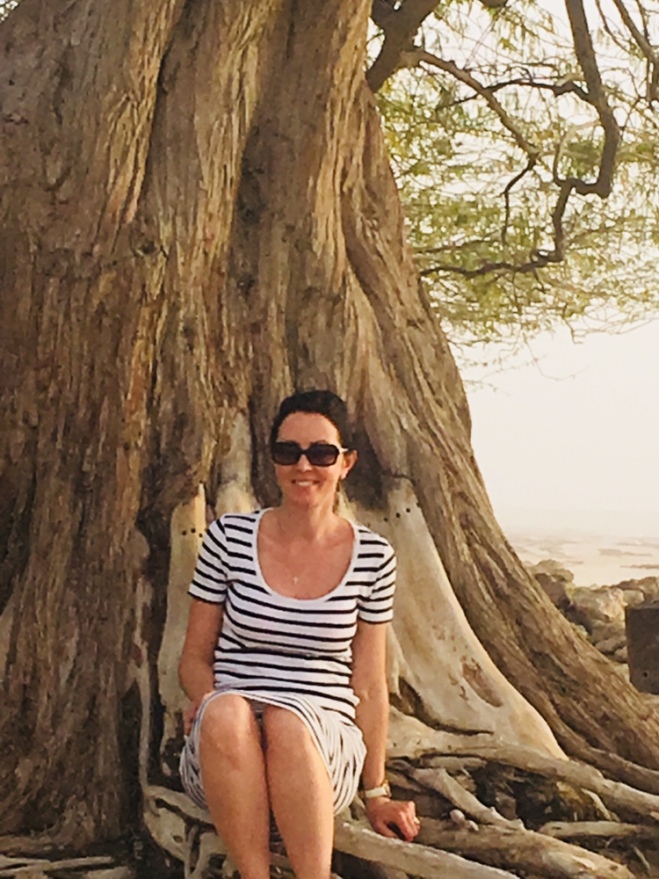 The guide book says it’s one of the best-known natural wonders of Bahrain. An enormous acacia tree, widely believed to be 4,000 years old, growing in an otherwise barren desert, it’s source of water a mystery, it’s growth a miracle.

Just the name of this tree stirred my emotions as we planned a trip there during half term this week. Driving away from the main road leading out of Bahrain, with the sun low in the sky, we headed towards a series of dirt tracks in search of The Tree of Life. A name straight from the Garden of Eden.

The signs to guide us there were scarce. As we craned our heads to scan the horizon, it became apparent that we were driving across a vast oil field. Spread out all around us were hundreds of giant metal arms, reaching down through the sand and rock to the oil below. Pylons and pipes punctuated the landscape, not the camels of my imagination. Maybe Eden was a bit further on. 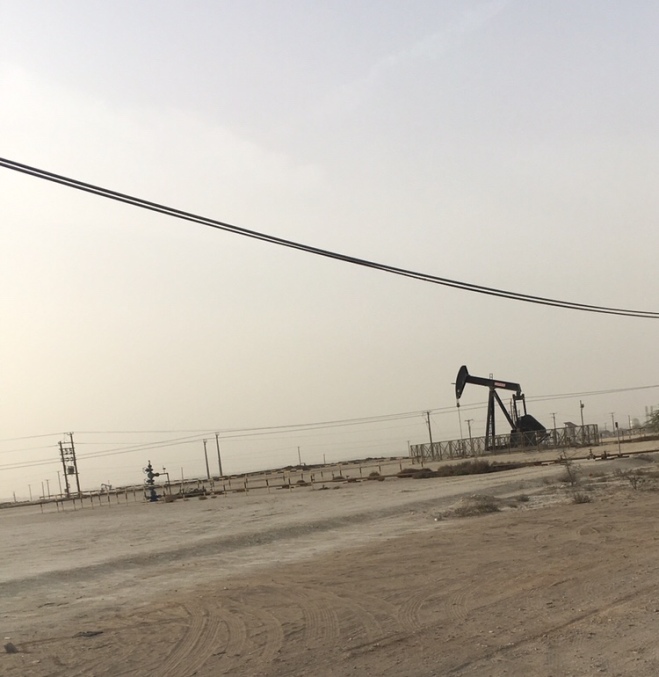 As we drove off the industrial wasteland, we crawled past the camps and tents where it’s workers seemed to live. And then there it was up ahead of us. The Tree of Life. Standing next to a half-built visitors centre. Graffitied. Strewn with litter. It’s source of water less of a mystery once we realised it was a few hundred feet from habitation and industry. And as it turns out, 400 years old, not 4,000. The reality didn’t quite match the story. 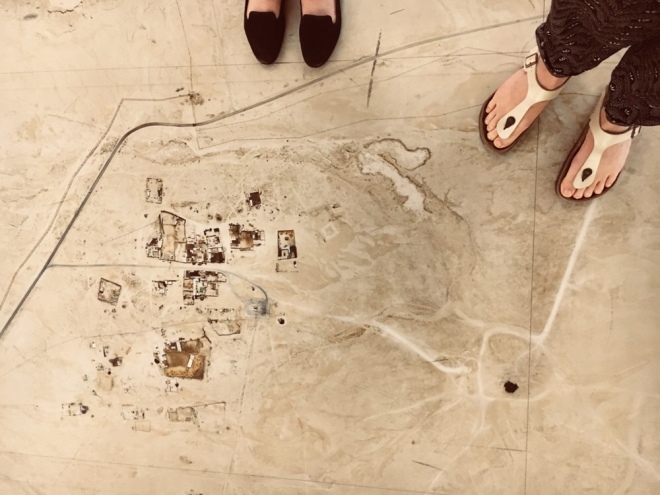 An aerial photo of the tree and the oil field

Still, I wanted some photos. We’d driven a fair old way to see this and I’d just started a love affair with Instagram. So I angled my phone away from the rubbish and the broken branches and captured carefree pictures of our children running around beneath its shade. On the way home, I tinkered with the images, cropping and filtering them until we looked as though we’d visited the tree in the guide book, the tree I’d hoped to see. 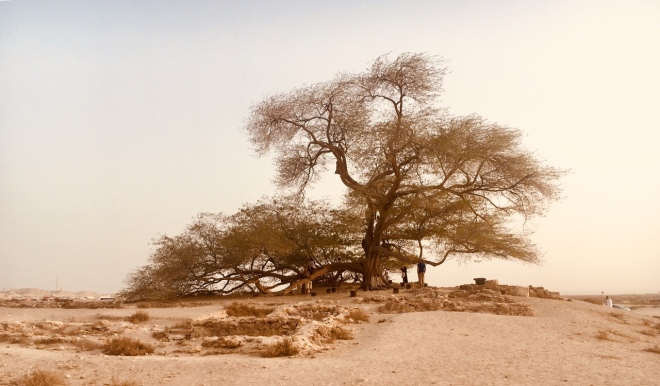 The next day, a scene from years ago drifted into my thoughts- a memory of my introductory lesson to GCSE history. The head of history had sat on an old-fashioned school desk for an entire lesson, swinging her legs, telling me and my classmates about ‘sauces’. They would be vital to our studies. Primary sauces were the best. Photos were primary sauces but they couldn’t always be relied upon. I sat wondering if she was going to break the desk, not having a clue what she was talking about. Everyone else took notes and I wondered why they weren’t all as confused as me.

I thought she was talking about Tommy K and mustard and I couldn’t fathom the difference between primary and secondary ketchup. It wasn’t until a few lessons later that the penny dropped. And even then I didn’t accept the argument that photos could easily be biased sources. I thought she must be a very suspicious woman.

Twenty-something years later, I take her point. Photos often don’t give an objective picture of our lives. FB and Instagram positively encourage us to tweak the facts, even if it’s just removing a disgruntled child from a family picture or the rubbish bins from the beach on our once-in-a-lifetime holiday, or deleting a snap taken before we’ve done battle with our make up bag. If we remove the photo-shopping and take away the air brushing, what are we left with?

Paul Young, author of ‘The Shack’, said in an interview: ‘I think every human being is a story, not just has a story… And every story matters…When you are with someone and you begin to hear their story, you really are on hallowed ground.’

The Bible says a similar thing. In 2 Corinthians 3:2-3, Paul describes us as letters, known and read by everyone, written ‘not on tablets of stone but on tablets of human hearts.’ 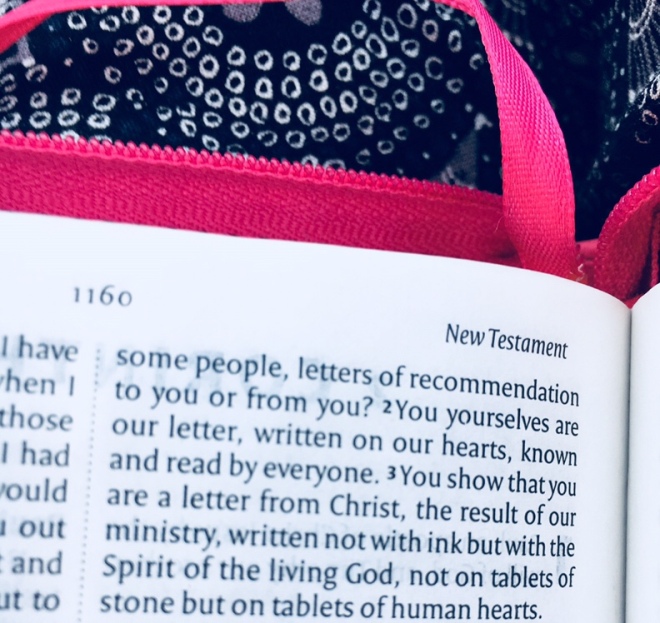 Our pastor posed the question in a recent talk- what are we writing in our letter? How are we filling the story boards of our lives? Not the ones we filter for social media but our real lives, stripped back and viewed in the round.

I read a blog this week that went one step further, challenging the reader to ask what their life would say if they put it on mute. What would the message of our lives be if we removed all the words, spoken and written, such as mine in this blog? What would our story say then? That made me think. In fact, it’s still got me thinking.

8 Love never fails. But where there are prophecies, they will cease; where there are tongues, they will be stilled; where there is knowledge, it will pass away. 9 For we know in part and we prophesy in part, 10 but when completeness comes, what is in part disappears. 11 When I was a child, I talked like a child, I thought like a child, I reasoned like a child. When I became a man, I put the ways of childhood behind me. 12 For now we see only a reflection as in a mirror; then we shall see face to face. Now I know in part; then I shall know fully, even as I am fully known.

13 And now these three remain: faith, hope and love. But the greatest of these is love.