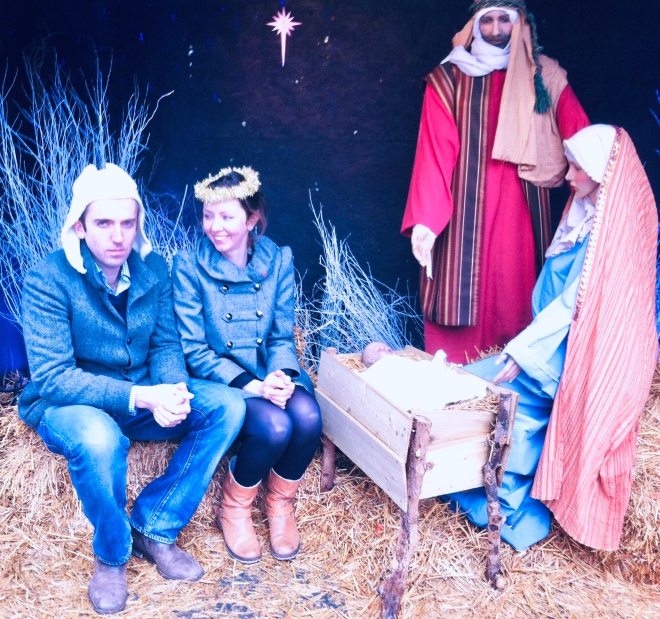 I don’t really like choral music. Over the years, I ve shared this view quite forcefully and frequently with Jack, who irritates me to distraction by subjecting me to his dreary organ dirges far too often for my liking. But it’s not something I often admit publicly- in case it makes me look like a bad person… Certainly uncultured, uncouth and a big Philistine, according to my husband, who probably last listened to something post-the Baroque period on our first date 15 years ago.

Cranking up ‘No Angel’ as he drove me home from dinner, he pretended to like Dido, possibly to woo me. If I’d opened his glovebox, I would have understood from the millions of classical music CDs that Dido was not actually his first love (not the modern one anyway, maybe Henry Purcell’s).

He proposed soon afterwards, perhaps hoping I wouldn’t notice that it would be a cacophony of cataclysmic proportions once we both started playing our favorite tunes. Bach and Bananarama don’t really mix. Handel and modern worship guitars not so much either. It would take a gifted DJ to splice these together (but maybe someone should try?!)

So how did I find myself willingy and voluntarily at St Paul’s evensong recently, all alone, agreeing to go in when the vibrant fun of London lay beyond, a very long service sheet being pressed into my hands, warning me that I would be listening for quite some while to the old organ pipes?

I have sat through the odd night of choral stuff for Jack over the years, shivering in some draughty old church, trying to get it. But I ve never really engaged with it. I start to hyperventilate a bit when I see it’s a choir that’s going to repeat every line 20 times more than is written out on the song sheet, experiencing the kind of fear I get when people suggest that I might like to do a telethon of ‘The Lord of the Rings’ cycle or Harry Potter films.

And yet lately, when I walk past a cathedral, almost any cathedral, I am drawn into it. It’s like there’s a magnet in there or a silent voice calling me out of the noise of the street and into the silence, beauty and ancient stones of something old, something that’s stood the test of time. It’s happened in London near Fleet St, most persistently by Southwark Cathedral, even at at a distance of several miles, and on holidays where little Catholic chapels are tucked away around seemingly every corner and I go sloping off towards them.

Whats going on?! Is it just the lack of church buildings where we currently live that propels me inside when I stumble across them. That’s probably part of it but not the whole answer. I spent quite large chunks of my childhood in older, more traditional churches, in school assemblies framed by lofty hymns. I know these places and as I grew up, they grew dusty, distant and out of date for a teenager wanting to ditch liturgy and set formats. And then over-familiarity bred, if not contempt, a lack of interest.

I have wondered if the way my feet start marching me past enticing shop windows and coffee places into ancient places of worship marks the tipping point into middle age. Do we start harking back to the hallmarks of our childhood once we find ourselves standing at an increasing gulf from those earlier days, as we edge towards a greater sense of our own mortality?

This isn’t meant to depress. I think it’s beautiful that the things parents, mentors and teachers sowed into our lives early on can start to bear fruit decades later (provided they were good lessons, obviously), especially where we may have appeared to reject and shun those people’s best efforts to guide and help us at the time.

Nostalgia may play a role but it’s not the whole answer. When I moved away from the older ways of connecting with faith, I also parted company with the idea that the fabric of a place of worship is important. I no longer cared whether it was a school hall or a sixteenth century chapel. The Bible makes it clear that the word ‘church’ refers to its people, not the bricks and mortar where they meet. I still believe that now- nostalgia hasn’t changed my mind. I don’t think the building of a church is magical or mystical- that there’s more of god in a church than, say, a pub. God is, in my understanding, everywhere.

So when I start to want to run my hand along an old church wall or photograph a stained glass window in a lady chapel, it’s not merely a trip down memory lane. It seems there’s something deeper at work but what? In a similar fashion to the cathedrals, I would love to go to the Holy Land and see where Jesus walked, where he began and ended his life on earth. I don’t believe there’s more of Jesus in Bethlehem than Bethnal Green so what draws me to that bucket list trip?

As I take my seat in St Paul’s, things get off to a bad start. I decide, if I am doing evensong, then I am doing it properly. My feet transport me to the front row, beyond everyone else, where I sit in a seat not reserved for Katie Kyle. Spotting the special reservation signs too late and realizing my error, I move back, noisily, clanking my water bottle, disturbing people, failing to turn off my mobile. I sit quietly for a bit in my new seat, appreciating my surroundings, but then the most bizarre thing happens. People all around me start grabbing at their belongings, slowly at first, then mildly panicked, forming a stampede towards the back of the cathedral.

I have no idea what they are doing or where they are going but my feet decide we will join in too. Hurtling towards the crowd, I ask a sides person what is going on as I run past him.

‘Where’s everyone going?’ I call out.

‘They’re trying to get seats in the choir stalls.’

So right by the dreary dirge then. I quicken my pace and launch myself into the queue, not really knowing why, and secure myself a front row pew right next to the choristers.

I continue to get things wrong, kicking over my water bottle, dropping my order of service, not standing when I am supposed to, sitting down too soon. Evensong is tiring! And then the most amazing thing happens. A sound I can only describe as exquisite, sublime, fills the cavernous cathedral’s vaulted ceiling, wending its way right up to the Whispering Gallery as the younger choristers break into song. And then older choristers respond, a deeper, commanding voice that talks back to them, answering their words.

I glance down at the order of service and notice a description of evensong in the introduction. It describes it as being as though ‘you were dropping in on a conversation already in progress- a conversation between God and his people which began long before you were born and which will continue long after your death…. For a brief moment, you step into the continual stream of worship which is being offered today and which will be offered to the end of time.’

It occurs to me then that I am eavesdropping, one of my favourite pastimes as a child, only not on teenage gossip or some juicy adult news, but on the conversation between God and his people, between the divine and his creation. I am standing there listening to this exchange, caught in the midst of its lyrical flow.

One of the things that Jacks musical tastes and mine do agree upon is that creation, with or without the acknowledgment or involvement of humans, continues to praise its creator regardless. Bach’s cantata  ‘Die Himmel erzählen die Ehre Gottes‘ opens with the words ‘The heavens declare the glory of God, and the firmament shows His handiwork. There is no speech or language, where their voice is not heard”. A couple of hundred years later, Tim Hughes sings in ‘Almighty God’: ‘If we did not praise, the rocks would cry out’ (based on Luke 19).

Finally, I start to understand my new-found love of cathedrals. It is, I think, about wanting to connect. To connect with the author of my faith and with the people who have met together down through the ages to encounter him too. In places where they have gathered, in the quiet of a church or the early sunrise in Galilee, his presence has been acknowledged and experienced personally and collectively. A space has opened up in the hearts of people also wanting God to move, to whisper, speak, convict, comfort, to communicate to them in infinite ways. In these well-trodden places of faith, peaceful corners of cities and towns, away from the main drag, where humanity has reached out to the divine, I find I want to do the same.

Tomorrow is the start of Advent, the 24 days the church has marked out for its journey towards celebrating the arrival of the infant Jesus. As we set out Advent calendars, maybe bring down decorations from the loft, dust off the star for the tree or a nativity set, it’s easy to see this as a time set aside from the rest of the year. Jesus comes out after Bonfire night and goes back in a drawer before Valentines.

During the festivities, we may treat him like I did those cathedral experiences of old, as something outmoded and irrelevant. Or as a story we have heard one too many times as a child and only half-listen to now. But those precious moments at St Paul’s reminded me that church festivities, from Advent to Easter and everything the year round, aren’t seasonal invites to a finite celebration.

They are an invitation to listen in on a conversation that has been going on between God and his creation since the beginning of time, which is still going on. It is one in which we are all encouraged to eavesdrop, not neccesarily to every last note all at once, but to that one little nugget he wants to share with us personally, whether that’s belted out on a set of noisy drums or piped out on a organ…