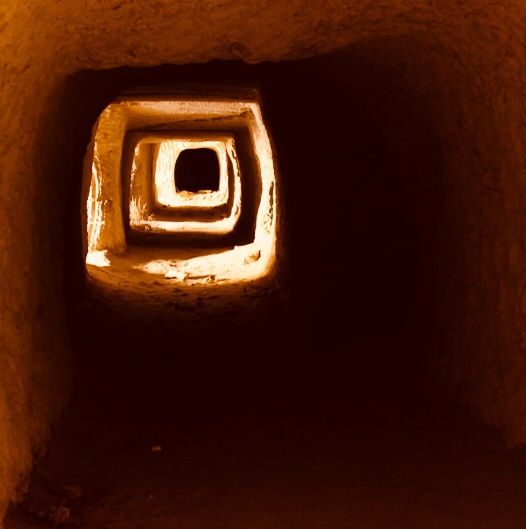 I have started to feel like a bit of a Job figure of late, like someone who encounters so many calamities that I question whether, collectively, they are making some sort of statement about me. Are they saying I am just unfortunate or deserving of bad things? Our current holiday is a case in point. Just as we were recovering from the lost luggage debacle, I ended up in a wheelchair in a Greek hospital, waiting for my foot to be x-rayed, my second hospital visit in 2 holidays! Surely this isn’t normal…

We were doing a beach crawl along the coves and cave of northern Milos when disaster struck. We were exploring Sarakiniko, a beach so beautiful, so unusual that we hadn’t been able to reach it when we first drove to it in the morning due to the crowds of people, picnics and parasols.

With the sun low in the sky, we made our way for a second time down the bleach white, swirling paths of this wedding cake-like bay. The children were delighted. It was a playground of possibilities. There was a rock set some way into the sea away from the coast line, where more adventurous swimmers were launching themselves from its craggy top. My daughter was desperate to join in, tugging on my arm, trying to persuade me to let her.

I didn’t want her to swim out so far. Happily, another distraction presented itself at just the right time: perfect rectangular cave doors disappearing into the rocks beyond the water’s edge. My daughter turned her attention to them, asking to explore their depths instead. So we did.

Once inside, knowing I’ve never recovered from the sewer scenes in Indiana Jones’ Last Crusade, my daughter joked that the labyrinthine tunnels might be home to rodents. I panicked at the thought. We were in total darkness but I could see a little doorway up ahead, casting a perfect rectangle of Greek sunshine on the tunnel floor.

I walked towards the light, treading very heavily and quickly to frighten away the imagined rats but then a Minotaur-like sound reverberated around us (a dad calling to his son, it turned out), the floor dropped away ahead of me and I fell clumsily to the ground.

Immediately, I knew something was wrong. I hadn’t heard the sound of snapping bones but I sensed that’s probably what had happened. As I hobbled back outside to find my husband, each pulse of pain said ‘You’ve ruined the holiday.’ That possibility hurt more than anything physical. We had been having the perfect day, a dreamy time of swimming, kayaking and playing, enjoying just being together. It had been care-free. Idyllic. And now it was almost certainly spoilt.

We made our way back up the winding path, my husband trying to carry the bags and prop up me. Every time I put my foot down, I whimpered in pain. We made our way like this for some minutes, slowly and hopelessly.

‘Sorry we didn’t get to you sooner. We saw it happen but we couldn’t reach you. But now we’re here to help you.’

I felt as though I was walking into the middle of someone else’s conversation but the man who had appeared at my side, seemingly from nowhere, was talking to me directly. He put his arm around my waist and placed my arm around his neck.

‘I’ll help carry you back to your car,’ he said, before devising a way to make a sedan chair from a towel, which he and my husband then used to transport me away from the beach below. The man said he was Irish, now living in Athens. He was tall, strong, about my father’s age, solid and kind.

The man’s wife was already looking up hospitals on her phone. She was Greek with perfect English and seemed to know everything. Two French girls had quietly collected our bags and were taking them ahead.

Our new friends led us to the hospital and stayed until I had been treated. When the x-ray revealed I had broken my metatarsal, I sat in my wheel chair and cried. The man and woman poured comfort on the situation like Cretan honey on Greek yogurt: ‘The best holidays are with your family and you are still on holiday with your family,’ they counselled.

There were moments of humour in the disappointment. Our youngest taking out nurses and people on crutches with a ride-on sheep he’d found. A man who couldn’t have cared less when I was fretting that my European health card was back at the hotel. ‘I don’t want to see that. That is so boring,’ he explained. I wanted to hug his disdain for red-tape.

A specialist finally turned up to look at my foot. He said I needed to wear trainers for a week and hurried off. I was cautiously pleased he was so unconcerned. Back at the hotel, the manager was put out that we hadn’t phoned him for help. ‘This is not a hotel, we are your family,’ he said before dragging his poor football coach friend to my sick bed to inspect my swollen foot. They didn’t trust the doctor’s trainer advice and went off to plan my future medical care between themselves.

The next day my foot was less swollen and bruised and I discovered the trainer advice was pretty good, except sartorially. Orange New Balance and sundresses make an ugly fashion statement. We carried on with the holiday as though nothing had happened. I even climbed to the top of Plaka’s castle, set on a hill towering above the town.

My foot felt heavy as I walked about but my heart felt heavier. It was as if a little rain cloud had entered my world of sunshine. It refused to budge, despite the delicious lunch we enjoyed, despite some window-shopping in pretty Greek boutiques, despite the children behaving like the world’s sweetest nurses, holding my hand wherever I went.

Overnight, the sadness settled on my chest and became a knot of anxiety. I couldn’t understand it. We were packing up our beach things for another fun day out and the knot was getting tighter. As we pulled up outside a supermarket to buy a picnic lunch, I realised the problem.

If the knot had been allowed a voice, it would have said: ‘You’re a loser, a failure, you can’t manage a holiday without making a mess of it. All those things you have planned for when you get home, the new ventures and projects, they’ll fail too.’

And then Regret piped up, leading me down its dead ends. Why did you go into that cave? Why didn’t you stay with Jack? Why did you hurry in the dark? It was as though Job’s comforters were inside my head.

I was also sad at how silent God seemed. I was cross that, when my need was greatest and I was pouring out my thoughts to him, I wasn’t hearing anything very audible back. Why is the voice of Fear so much louder than God’s voice?, I wondered.

As I wrestled with these unhappy thoughts, I asked my husband to pray with me. And he did, sat in our 1990’s Barbie and Ken style jeep, with Greek supermarket shoppers walking past us.

Afterwards, as we queued for feta and salami, the rain cloud didn’t disappear but the other voice inside my head grew a little louder. It seemed to say: My voice is greater than the voice of Fear. It seemed to say: your problem lies in the fact that you find it easier to listen to Fear rather than listening to my promises.

As I walked along the beach after lunch, this other voice whispered ‘You’re not hopeless, you’re my child.’ It said ‘Do not be afraid, I am with you.’ It promised ‘I will command my angels concerning you, to guard you in all your ways.’

And another thought occurred to me. It was actually a dream I had the night after my accident. It may have just been my own muddled thoughts but perhaps there some truth buried within it. It told me that something more grave may have lurked by that rock out at sea, the one my daughter wanted to swim to. I’ll never know but maybe angels were in our midst even there.

And I realised, as the sand tumbled over my swollen foot on my way to the beach shop, that God’s angels were most definitely at work in the aftermath of my accident.

The sun seemed to reappear from behind the rain cloud and the knot around my heart fell loose. My foot would mend and I would step out in faith again.