During our travels around the UK last month, with a stirring in our hearts for a place to call our own, we found a house we thought might be it. We made an offer and it was accepted. For exactly a week and a day, my family and I enjoyed the tantalising prospect of being almost home owners.

We instructed solicitors and paid for searches. We talked about who would have which bedroom, we discussed the possibility of renaming it, we daydreamed about knocking down walls to make a bigger kitchen with an island we could all sit around.

We hadn’t gone quite as far as popping open any champagne. There was a part of us that remembered the road to home ownership can be a bumpy one. We didn’t entirely count our chickens, even if we had secretly wondered about keeping some in our new garden

Then came the call. The embarrassed agent. I didn’t speak to him, I just overheard my husband’s end of the conversation, but I could sense the agent shifting in his seat. It was a courtesy call to put us on notice that someone else had registered an interest in the same property as us. A waffly way of saying someone else had offered more cash. £18,000 more cash. My baffled husband asked how this could be: decent agents don’t entertain offers from usurpers, do they?

The agents said they had tried to shut their ears when the offer was made but the gazumper knew their stuff and made the offer anyway, despite protestations, knowing the agent would be duty-bound to inform the vendor. The agent told us the vendor would give us an answer by the close of business the following day.

A precious weekend with my husband at home became the longest weekend we’ve spent in months. The agent didn’t come back to us within the time-frame. We spent 2 days pretty much knowing what was coming but hoping we might be wrong. A slow and painful break-up.

As those who read part 1 of this blog may remember, we had spent a lot of time praying about the decision to make our offer. It had seemed so right for so many reasons. And on the day we’d given ourselves as a deadline to make an offer, I received a verse from a friend who didn’t know about the house hunt. It was Revelation 3:8:

To give some context, the manner in which we were originally able to view the house (we didn’t have a viewing but the door was open and the agents gave permission for us to take a peek) made the reference to the open door seem particularly timely and significant. We made our offer feeling it had been confirmed through prayer.

So when the agent rang for a second time, now positively squirming and sweating, to say it was official: we had been gazumped, it hurt on many levels.

First, I went through the positive, this-is-fine, we-haven’t-actually-lost-anything phase. But it was quickly followed by the ANGRY phase, where I was kept awake at night wishing bad things on the vendor and the gazumpers, desperately trying to replace vengeful thoughts with happy ones.

The word ‘gazumped’ is thought to come from the Yiddish word meaning ‘to cheat.’ And that’s how we felt. Cheated of something we were told would be ours by people who came in via the back door.

I wanted the vendor to know how this felt. So, poor man, I emailed him. I tried to be polite. I think I was. I wished him well but I felt raw. The MAD phase then kicked in and I sent him my blog. Then the angry phase kicked back in and I sent a request for him to reimburse us our £300 from his £18,000 (even though he’s not obliged to).

I want to say he wrote back something nice but he has maintained a stony silence where previously there had been friendly exchanges. A big wall of silence like the kitchen wall we had hoped to knock down. It seems we won’t be knocking down either.

I know all of this will mend with time. There are other houses out there. As I concluded in my last blog, my true home is not a place of bricks, it’s a place of relationship. So why does it hurt so much?

It’s because the thing I lost in all this was the sense that I had heard from God. We prayed and God seemed to answer. And then this happened.

I had decided not to blog about this twist of events until there was something good to report. Some happy news, something triumphant and celebratory that made sense of this. But that’s not real life. Life is messy and faith can be confusing. Sometimes it’s like we are soaring on wings like eagles, other times it’s like we are stumbling and falling.

I don’t think it helps us to encourage one another in our walk of faith if we hide the times that didn’t make sense or when we got things wrong. It’s good to share our time in the the valleys as well as our mountain top experiences.

I think it’s often when we are searching for God that we grow the most- when we want to find him, we want to understand him, when we are desperate for answers. In my experience, anyway, that happens most intensely when we are in the valley, trying to climb out. So the potential for this gazumping disappointment to deepen my faith is great.

Provided, that is, I don’t turn my back on God. At best, right now, I am cross with him and, at worst, I’m wondering whether faith is worth bothering with. Sadly, some of that turning-away behaviour has already crept in. The closeness I felt through the house hunting, my love of Jesus that I professed at the end of my last blog, threatens to leak away in my confusion and disappointment.

And yet I have been here before. I have felt baffled by God in the past and then later been blown away by him. I know, in my more mature moments, that He hasn’t deserted me in this either, that his lens on this is far wider than mine and that he can see further down the line to the point where this all makes sense, where the penny drops and I can see what he could see all along, that perfect eureka moment.

We had a housing nightmare some years ago that has kept coming into my mind this week. It was a military housing problem that time. My husband had been posted to Hampshire but there was no house for us to live in so the rest of us stayed where we had been living for his previous posting. We lived apart for 6 months before we finally moved into our new house together.

Three months later, with the children just about settled in new school and nursery, my husband, who was in Afghanistan by then, was promoted. Lovely. But he was told his new job was in London. I spent a weekend in bed crying. I couldn’t do it. I couldn’t move again. We weren’t allowed to stay in our new quarter so the only way of staying was to rent privately. But local rent was five times more than our quarter.

We couldn’t decide what to do. I went to pray with the elders at our church. During our time together, our elder read out the following verse:

It was nice to hear the verse but, in truth. it didn’t seem to have any bearing on anything. But a while later, my mum and I went to view a pretty rental cottage as a potential alternative to moving everyone to London. As we pulled up outside, my mum pointed to the plaque by the door.

The sign said: ‘Vine Cottage.’ I knew that this was more than a house sign. It became our home until my husband was posted back to Hampshire again, with him valiantly driving to London every day so we could live in it together. It was one of the happiest times of our married life.

That story reminds me that God does speak. We do hear him. But sometimes we have to wait to understand the message. The verse about the vine didn’t make sense when I first heard it. But later on, when it did make sense, it brought a peace and a bubble of inner joy that’s hard to describe. 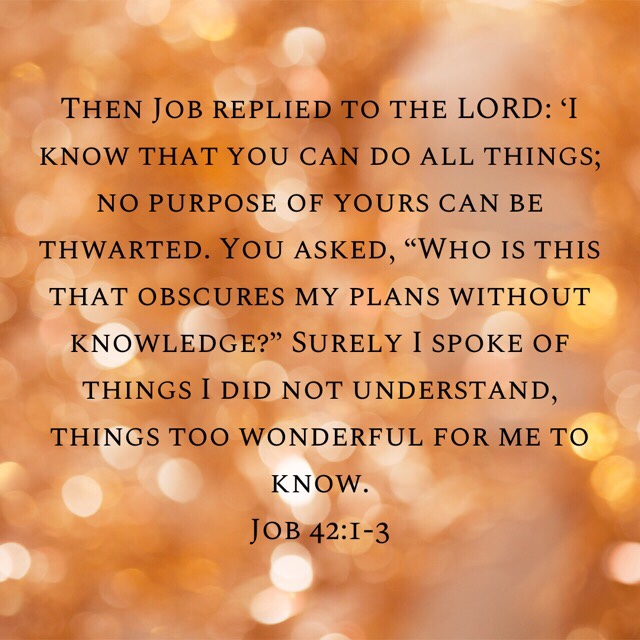 There may also be parts of our walk that never make sense in this lifetime. I know a Christian in her 80s who couldn’t understand why she was called to do missionary training in very difficult circumstances, only never to work as a missionary. And as far as I know, she never got the answer. Ultimately, she didn’t let it hurt her faith. She told me she talks to Jesus every day- she trusts him with the mysteries of life.

A friend said to me this week that she struggles with faith because she can’t understand why certain things happen and why others don’t. I wanted to say something uplifting and encouraging but this was on the Gazumping Day and, actually, I agreed with her to a large extent. I don’t get it either. Why do gazumpers get the house? Why is there even such a thing as gazundering? And these are just life’s irritations, we’re not even talking about the horrid stuff.

As I was lying awake this week, trying not to plot revenge, I got a sense of something that brought me the peace I needed to sleep. I think when we spend time talking about God’s plan and then something unpleasant happens, it can be easy to assume he is somehow responsible. We think he must have willed it. But I got the sense that God was saying he was sad for us. He actually felt the same as we did. And then I thought of the story of Lazarus.

Jesus hears Lazarus is ill but before he gets to him, Lazarus dies. Jesus seems to know this and says he will wake him from death. But the baffling thing is, when he arrives to find the family mourning, Jesus weeps too. Why? He knew he could raise him. He knew there would be a happy ending. 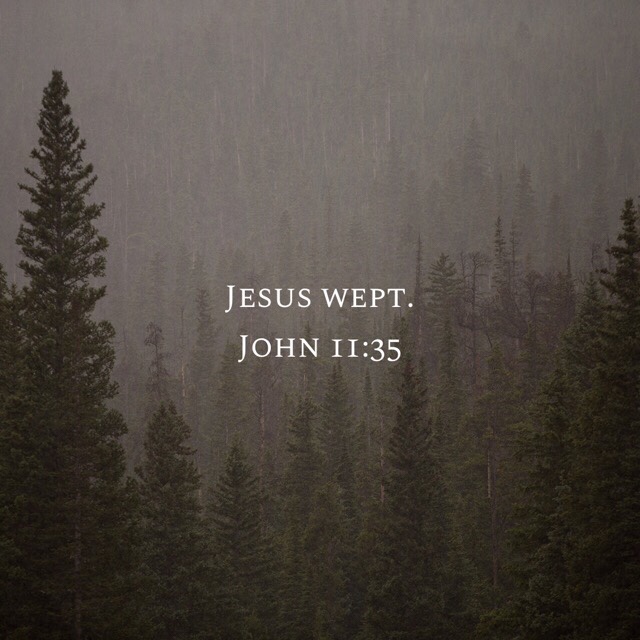 I think it must have been because, even though no man, not even death, can shut the door on God’s plans, he still feels our pain when the plan appears to go wrong, when life’s twists and turns leave us disappointed. He feels our hurt the same as we do. He may be able to see all the way to the end of the story but he feels our pain even so.

I think God is sad and disappointed for us this week but I think he still has a plan for us. A plan to prosper us and not to harm us, the same plan he has always had. I just need to hang onto the promise he gave us: that he has opened a door that no man can shut.

Searching for a seemingly distant God, the psalmist above goes on to show us what to do in those times: trust and praise.

I have found comfort this week in praise, especially the lyrics of Brooke Fraser’s ‘Shadowfeet’.

As I start scrolling through Rightmove again, I know I can cope with losing a house as long as I stay on the well-lit way home.