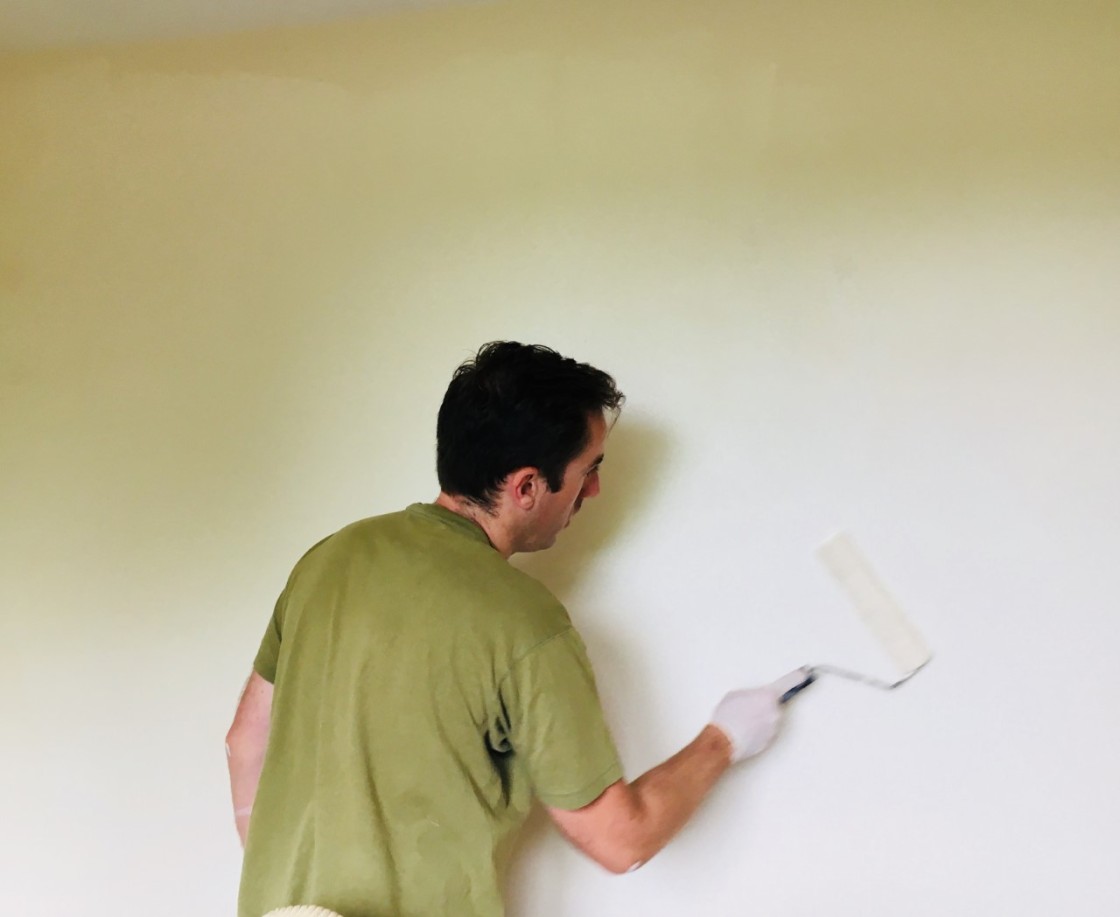 The House That Jack Redecorated

People occasionally ask what, as a military family, is the toughest part of moving around with each new posting.  Is it the severed friendships, the search for new schools, the children’s homesickness?  Nope.  It’s the military march-out.

For anyone unfamiliar with this term, this is the assessment carried out on your military quarter at the end of your time there to check you’ve returned it to the state in which you received it. On arrival into the quarter, you complete a form logging all the existing defects. When you leave, you won’t be responsible for any fraying carpets or chipped paintwork you inherited.  Provided you logged them.

When we were preparing to move to the Middle East, one of the first things I did was book the march-out.  A member of the housing team came over to advise me on how to get the place up to scratch.

‘You’re going to have your work cut out here,’ she beamed  ‘You didn’t send in your log of defects so you’re responsible for every single thing that’s wrong with the property.’

There was a lot wrong with that property.

The housing lady smiled.  ‘If you had that piece of paper, then it would be different but without it…’  She then took me on a guided tour of my own home, pointing out all the faults I’d spent the last 2 years grumbling about.

‘You can leave 3 picture hooks per room.  The rest need filling in and painting. And we no longer accept patch-painting- you need to repaint the whole wall.’

Patch-painting is the bread-and-butter of march-outs.  If you’re a real slacker, you squirt toothpaste in the holes.  It’s what we’d been doing for a decade.

‘I can tell when there’s been patch painting,’ she warned me.  She handed me a manual of what we needed to do to pass the march-out.  ‘We’ll charge you the cost of redecorating if you don’t follow the guidelines.’  She didn’t reveal how much this would cost.

Despite tearing up the house and scouring emails, that vital bit of paper never materialised and my husband and I studiously avoided getting onto the subject of WHOSE FAULT IT WAS.  The upshot was that my husband took half-term as leave in order to repaint the 15 offending walls.  We had the kids booked into kid’s club.  I just needed childcare for one day.  I rang my dad for help. He’s a doctor, dealing with life and death situations on a daily basis.  He doesn’t have much patience for triv.  ‘ Just walk away and pay the fine, Kates.’  At the time, my friend from school was having 2 rooms in her house painted by a local decorator.  It was costing £600. We’d need to quadruple that, at least. I didn’t want to pay the fine.

My dad’s so generous he probably would have paid it for us if it would have stopped me fretting but he obligingly agreed to do things my way, booking a day off work to the take the children out.

When military friends asked what we were doing for half-term they looked bewildered as I shared our plans.  They politely told me I was being ridiculous.  No one in the history of the RAF had ever done this much work for a march-out.

Maybe I was pouring all my anxieties about the move into this assessment of our exit.  I’d became so worried, I kept ringing the housing lady to check we were doing it right.  I rarely got hold of her but on one occasion, when she made the mistake of answering the phone to me, I asked her to come back over to look at one of the walls.  This time she didn’t smile.  She was thoroughly fed up with me.  The irony was that in trying to please her, I’d alienated her, which made me fret even more, thinking she would now bring a microscope with her when she came for the march-out.

Half-term arrived.  Children safely deposited at kids’ club, my husband went to buy paint whilst I prepped the walls.  When he came back swinging a huge pot of B&Q magnolia gloss, I waved the manual at him. ‘It says we have to use Crown.’  He exploded.  I pointed out what a waste of time it would be if we did the whole thing and failed because it was the wrong make of paint.  ‘Magnolia is magnolia!’ he shouted through the car window as he sped off back to the shops.

The mammoth task ahead of us mushroomed when we started taking pictures off the wall.  Where we expected there to be one hole, there were 3,000, the result of my husband’s ‘Frank Spencer’ approach to DIY.  When we removed the pan rack and half the kitchen wall came away, I politely explained that I would happily live with my pans on the kitchen floor in the new house if it meant he stayed away from rawl plugs. 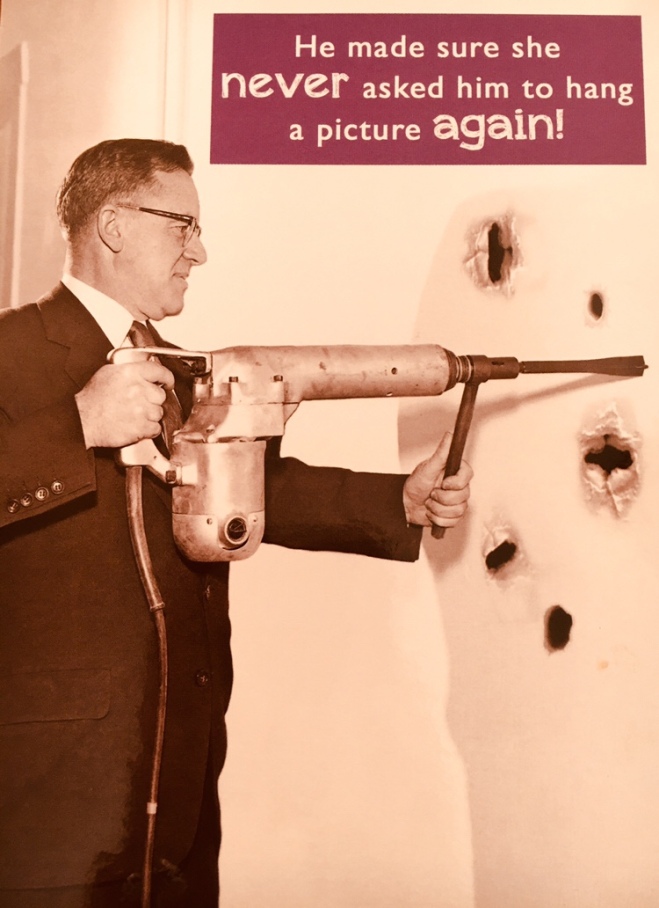 As we moved up the stairwell with our paint rollers, it became apparent that our ladders weren’t long enough for the job so poor Dave, our decorator friend from church, paid us an emergency visit with his poles.  Then there was the afternoon when various choice words erupted from our son’s bedroom.  I couldn’t understand why as this was the easiest room- there was only one wall to do.  But on standing back to admire his handiwork, my husband realised the room hadn’t originally been magnolia.  Previous tenants had painted it pale toffee, which had escaped the attention of us all, including the housing officer.  Only it wouldn’t escape her notice now that the walls were different colours.  My husband set about repainting the other three walls.

There were days that week when I didn’t dress or leave the house.  The enormity of the task meant I had paint brush in hand before breakfast and I was still like it at dinner time.  The children would come in from kids’ club asking why I was already dressed for bed and my husband would explain that I had never been dressed.  My life had shrunk to the size of our quarter.

The situation became so farcical that to amuse myself, I started to find ways of poking the grizzly bear that my husband was impersonating. When he touched the white ceiling with his magnolia roller, I told him he would now need to repaint the entire ceiling.  ‘You’ll need another day off work,’ I observed.  He was second in command of a busy squadron.  He exploded again, waving his roller at me and spraying the carpet with paint. ‘You’re going to need to hire one of those Dr Rug machines now,’ I said, ’you’re definitely going to need to take more leave.’

Thankfully the house passed, without the need for further leave. But it was a little galling to learn from our neighbors a few weeks later that a full redecoration was ordered after our departure! 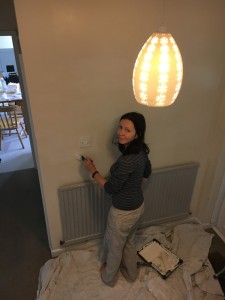 It’s taken a while to see any positives in this vignette.  Reflecting back, 8 months later, it occurred to me that I used to view God in a similar way to how I viewed the housing officer. I thought he wasn’t always available, I believed he might help me if I caught him on a good day and I worried that he was probably scrutinising the performance I was putting in. I worried about his equivalent of the housing manual- a check-list of expectations he had of me. I felt sure that he loved me (here the metaphor breaks down as the housing lady definitely did not love me!) but I thought I needed to strive to earn his affection.

With time, my faith matured but I occasionally had that image of a disapproving father.  I’m not sure where it came from.  My dad wasn’t the template for it- he’s not like that- and my parents and church taught me about God’s grace, his unconditional love.  I have a Theology degree and I know a bit about Martin Luther!  But somewhere along the way it had crept in.

Maybe it was partly down to the type of church services that I went to as a child. Our church was evangelical with great Bible teaching but there was a lot of liturgy- that is, words and prayers we repeated every week. I don’t want to sound in any way critical of that- I know a lot of people are drawn to God through those services.  But we are all made differently and for me, those words became like a contract between me and God. Maybe it was the lawyer in me but my approach became legalistic. I thought, if I said the words and meant them enough, God would be pleased and if I didn’t, maybe he wouldn’t.

I remember telling a friend once that I felt the harder I was finding my walk as a Christian, the better I was doing- the more God would approve of my efforts.  She looked horrified and very sad.  She explained this was totally wrong and reminded me that God rescues us because he loves us, not because of anything we do.

Since my thirties, we’ve gone to churches that don’t use liturgy. I find they suit me better. I think we need to avoid things that hinder us from having an encounter with God and that’s different for different people. I love seeing there’s a band in church, someone else would rather find a choir. As long as our churches are Bible-centred, Jesus-centred places, I don’t think God minds where we worship. Happily God’s creation is full of variety, even down to how we enjoy spending time with him.

In more recent years, I have come to realise God is actually a bit like my dad.  It turns out they are both are willing to pay for my mistakes.  My dad had his cheque book to hand for the march-out debacle, God sent his son to take the blame for all of our mistakes.

It also occurred to me how small our view of life risks becoming when we make this performance-based assessment of our lives. This can be true whether we are Christian or not.  Our focus becomes ourselves- how we are faring, morally, financially, romantically, career-wise, depending on our favoured measure.  Like me when I was worrying whether our quarter would pass muster and my life reduced to fit its parameters, our perspective can shrink to the size of our worries.  If we accept we’ve already passed muster in God’s eyes, our perspective is free to grow as wide as our dreams.

The song below challenges us: could we live as though God’s grace is stronger than all our faults and failures?  Could we live like this? If so, we could change the world…